2a offers a turnkey solution for your business, with superior quality, good margins and support long after your purchase

2a quality means an item is guaranteed to be authentic. 2a respects the natural wear and age of designer goods while carefully screening obvious flaws like tears, torn tabs, major stains, or missing parts. At 2a, we believe that authenticity verification is best left to the experts, so that your clients feel completely reassured they are purchasing authentic handbags. Our head authenticator alone has authenticated well over 100,000 luxury goods, with a perfect track record.

Louis Vuitton uses a variety of different materials for its items, making it truly a versatile brand with a multitude of prints and textiles for any taste.

Gucci uses a variety of different materials for its items, making it truly a versatile brand with a multitude of prints and textiles for any taste.

Louis Vuitton is well known for its particularities in font. Though the brand is known for its consistency when it comes to its logo, there are a few exceptions, like squared Os on vintage rivets, as opposed to the perfectly rounded Os featured on the leather embossed logo itself. The Louis Vuitton logo is particular for a few reasons: perfectly rounded Os, an L with a short leg, two very closely (almost touching) placed Ts.

Additionally, the logo has changed slightly since 1990. Previously the cou ntry of origin was spelled using all lower-case letters ( i.e., made in france), but this changed as of 1990 to include a capital letter for the first letter of the country of origin (i.e. made in France).

Gucci, like Louis Vuitton, has been using a consistent logo on its items since the late 1980s. The Gucci logo features rounded letters like the G and C that look like perfect circles with missing elements. Also, it is important to notice that there are sma ll equal serifs on the font, and the left side of each letter is thicker than the right. Lastly, the “made in italy” typography will always feature a lower-case i

Chanel has been featuring the same logo for decades with only slight updates over the years. Like Gucci, the C in Chanel appears as a perfect circle, with a missing element. The logo Chanel always appears entirely capitalized. On vintage flaps, the width of a genuine Chanel logo is always 3.3cm. The stamp itself will be printed in the same colour as the hardware. On vintage flap bags made in lambskin and in France, the country of origin is printed on the opposite side of the bag, whereas those made in caviar or in another country will feature the country of origin directly beneath the Chanel logo.

One of the biggest indicators of authenticity on the Prada logo is actually only half true. The notch from the leg of the R in Prada, while it may an important indicator of authenticity, is only relatively recent. Prior to 1990, this missing notch was actually not yet integrated into the letter. The As in Prada are particularly important when authenticating Prada: the rig ht side should be thicker than the left, and there is an overhanging serif. However, it is important to note that this feature is present on both the hardware and plate logos, but is omitted from the Prada font of the interior jacquard lining.

Luxury brands have specific standards for stitching. This is what sets a luxury designer apart from your standard fast-fashion brand; the stitching is absolutely integral. Generally, both Louis Vuitton, Gucci and other luxury brands will have stitching that is slightly angled upwards, but this varies per model. The stitching should be even lengths (not small then long stitches; the thread used will be the correct material and gage, and should not look too small or large for the holes.

Generally, luxury items match the stitch colour to the exterior leather colour of the bag. With Louis Vuitton items, the stitching on monogram bags is generally yellow because of being dyed with beeswax, which leaves a specific shade of yellow, close to a yellow mustard. On counterfeits, the colour is almost always wrong, usually a highlighter shade of yellow instead.

It is important to note that specific models will have double or even triple stitches in certain areas (like the base of where a pocket is attached), in order to reinforce the stitching. This is not a sign of sloppy craftsmanship; it is necessary to increase the longevity of luxury items. The same model should have the same double stitches in the same areas, so it is important to note where these are located on ea ch bag.

It is important to know the number of stitches on a certain model in a specific area. This stays consistent across all bags of the same model (though it may change if the model is revamped, like the ever-popular Louis Vuitton Speedy.

Across all brands, it is important to verify the shape of the hardware to verify any inconsistencies in the design. Authentic Louis Vuitton zipper pulls feature a more angular zipper, with square corners, whereas counterfeit zippers look more rounded.

The hardware featured on vintage Chanel bags (those made prior to 2008) is particularly coveted due to the use of 24k gold on the hardware. Chanel gilded their hardware in 24K gold, giving the bag hardware a deep golden hue that was identified by a hallmark on the CC turn-lock. However, this is not always the case. On vintage Chanel bags made in Italy, or that have a matte gold finish will not have a hologram, even though they are gilded in 24k gold.

On top of the hardware itself, the screws or other fasteners used are an important indicator of authenticity. Chanel is a prime example of this. On the classic flap bag (excluding minis), the screw used to attach the backplate to the hardware mu st be fastened with flathead screws. Any other screw type is counterfeit

Verifying hardware against the approximate year of manufacturing is an important detail of authentication, that is rarely well copied. It is important to note in which years or models your Gucci bag should use its own proprietary zipper, and in which years it uses other branded zippers like Lampo, or even unbranded zippers.

When considering authenticity, serial numbers and date codes are of the greatest importance. These numbers either identify a single bag to the brand, as is the case with Chanel items; indicate a time and place of manufacturing, as is the case with Louis Vu itton and several other LVMH owned brands; or indicate a model and supplier batch number, as is the case with Gucci. When considering the authenticity of these serial numbers, there are a number of factors we need to consider, such as: font, interpretation, whether or not the code corresponds to the correct era or year of manufacturing, and many other details.

How to read a Louis Vuitton date code:

Early 1980s – 1984: The very first date codes were used by Louis Vuitton during the early 1980s. Prior to this, there were no date codes. During this period, Louis Vuitton used only a 3 - digit code comprised only of numbers to indicate the year and month of production. The fi rst two numbers indicated the year, and the final number indicated the month of production. For example, if the code is 823, this indicates the item was made in March (3) of 1982 (82).

1985 – Early 1990: This is a transition period for Louis Vuitton. Some bags manufactured in 1990 will follow the proceeding format, whilst some follow the previous eras. Date codes during this period could be listed with the two letters indicating the country of manufacturing, with four numbers following. In this case, the first two numbers indicate the year, while the third and fourth indicate the month. For example, the code TH8911 indicates the item was made in France in November (11) of 1989 (89).

1990 – 2006: Louis Vuitton uses a 6-digit date code, with two letters ind icating the country of production, followed by a series of 4 numbers. The first and third numbers indicate the month of production, while the second and fourth indicate the year. For example, a date code reading SD1006 indicates the item was made in the US A in October (10) of 2006 (06).

2007 – March 2021: Similar to the previous format, Louis Vuitton now uses the first and third numbers to indicate the week of production. For example, a date code reading DU4037 indicates that the item is made in France in the 43rd week of 2007.

March 2021 – Present: Louis Vuitton no longer uses date codes when manufacturing their items. Instead, a microchip is used, hidden in the lining of the bag. Though these chips can be scanned using an application on your phone, only Louis Vuitton employees can read the code using an internal application.

How to read a Chanel date code:

1986 – 1988: The first format of six-digit Chanel serial stickers (1XXXXX to 42XXXX) was a white sticker with subtle interlocking CC logos throughout, and with an opaque sticker overtop. The serial number is printed on the cut-out portion of the sticker, usually on the left side. There is no large X cut-out on this sticker to prevent the sticker from being removed; therefore, it is possible for handbags during this period to have missing serial stickers. This series has no strikethrough on 0s and has feet on 1s.

1988 – 1990: The second format of seven-digit Chanel serial stickers (043XXXX to 15XXXXX) was similar to the first series stickers. As of numbers starting with 43, a 0 is added prior to the number for those under 1000000. The CC logo throughout is slightly more prominent than on the previous series. This series has no strikethroughs on 0s, and has feet on 1s.

1990 – 1991: The third format of seven-digit Chanel serial st ickers (16XXXXX to 19XXXXX) was similar to the second series stickers, with the only difference being the pattern of the CC logos and a slight font change. 0s have no strikethrough.

1991 – 1993: The fourth-generation sticker (20XXXXX to 26XXXXX) changes significantly from the previous generations. Now, the number is printed directly on the all - white sticker, as o pposed to a cut-out portion. The font remains the same from the third generation. 0s have strikethroughs and there are feet on 1s.

1994 – 1998: The fifth-gener ation sticker (27XXXXX to 56XXXXX) again changes significantly from the previous generation. Now, the number is printed directly on a textured sticker on the larger white sticker with the CC logo. The font is now thicker, due to using a heavier ink. There are strikethroughs on 0s; however, it is important to note there are no strikethroughs on 0s between 52XXXXX to 56XXXXX. There are no feet on 1s.

1998 – 2021: The sixth and final generation sticker (57XXXXX to 31XXXXXX) changes significantly to the current generation of stickers used by Chanel. Now, the number is printed directly on a sticker with go ld flecks throughout the sticker, and a large X cut-out overtop to prevent the sticker from being easily removed. Additionally, there is a black stripe on the left of the sticker, and the words CHANEL in all caps separated by interlocking CCs is located on the right side. Above the serial number are two interlocking CCs. There are now strikethroughs on 0s and feet on 1s. 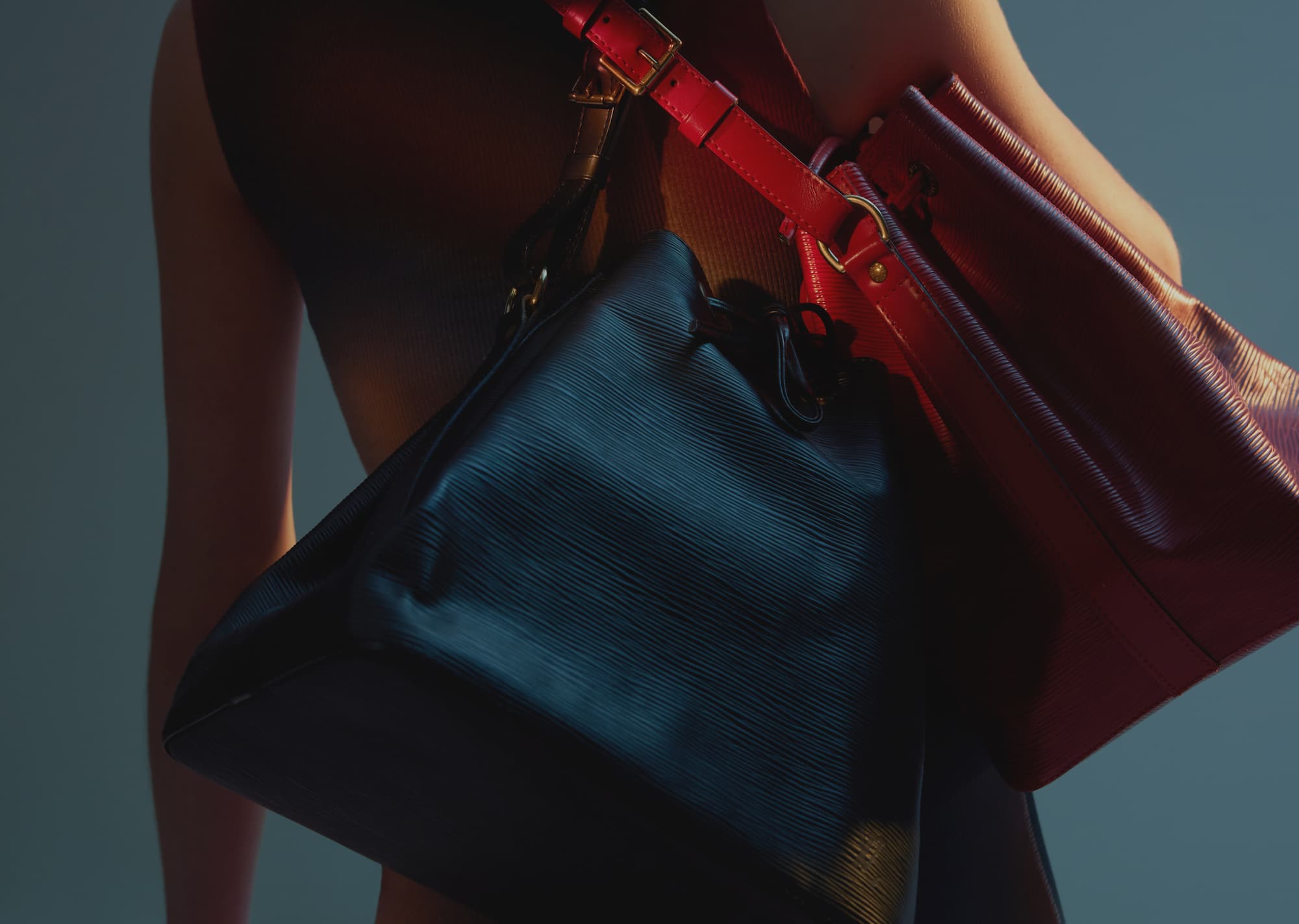